You are here:Home›Resources ›Health Service Utilization and Expenditure Survey among People Living with HIV 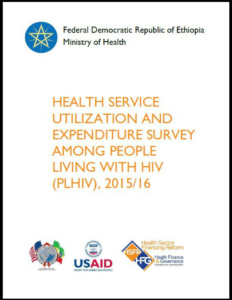 This is a report of a national survey that was conducted in September-October 2016 to generate evidence for the sixth Ethiopian Health Accounts (HA VI), which estimated health expenditures for 2013/14. The survey collected data on health service utilization and expenditure among people living with HIV/AIDS (PLHIV). It sampled PLHIV from all nine regional states and the two city administrations of Ethiopia. Using the Networks of HIV Positives in Ethiopia (NEP+) – the national-level umbrella of regional PLHIV networks – as a sampling frame, a total of 4,171 PLHIV participated as respondents in the quantitative household survey administered for the study.

The purpose of this survey is to generate up-to-date empirical evidence on health service utilization and spending on health care by PLHIV in Ethiopia. The specific survey objectives are: