You are here:Home›Resources ›Estimating Bangladesh Urban Healthcare Expenditure Under the System of Health Accounts (SHA) 2011 Framework 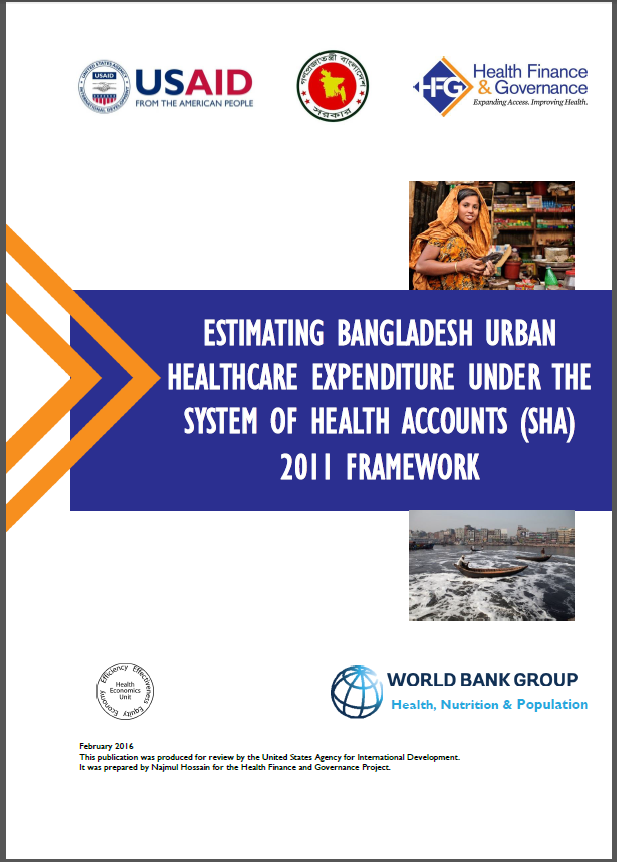 Resource Description: Bangladesh is a densely populated country with 23 % people residing in urban areas and with a 3.5% annual growth of urban population. Bangladesh Bureau of Statistics divided into seven administrative divisions: Barisal, Chittagong, Dhaka, Khulna, Rajshahi, Rangpur, and Sylhet. Each division is divided into zilas, and each zila into upazilas. Each urban area in an upazila is divided into wards, which are further subdivided into mohallas. A rural area in an upazila is divided into union parishads (UPs) and, within UPs, into mouzas. The people who are living in wards were considered as urban population and the Ups’ population was considered as rural. However, the division between urban and rural health care is not so distinct and it is difficult to create an urban and rural demarcation of health expenditure. According to BDHS 2014, the urban population has more access to facility delivery, qualified doctors and less unmet need for contraception. This raises the question whether there is more health expenditure by urban population than the rural.

This study aims to estimate the health expenditures of the urban population in terms of provider, financing agents and functions by analyzing the data of National health accounts, which will eventually give a specific direction to identify the gaps and way of addressing those issues.