You are here:Home›Resources ›Entomological Monitoring, Environmental Compliance, and Vector Control Capacity for the Prevention of Zika and Other Arboviruses: El Salvador Assessment Report 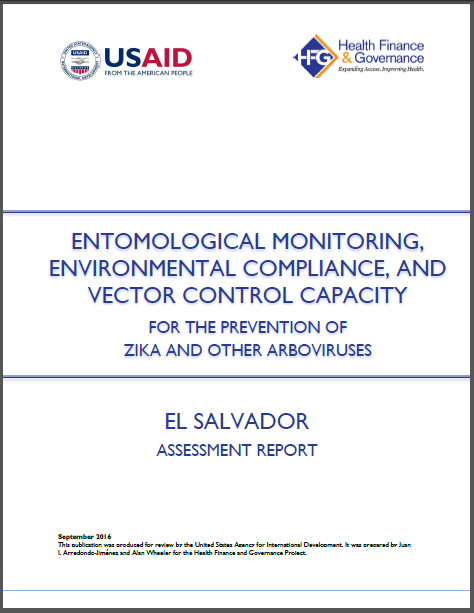 The first case of local, vector-borne transmission of the Zika virus in the Americas was identified in May 2015 in Brazil. By July 2016, the virus had spread to nearly all Zika-suitable transmission zones in the Americas, including the majority of countries and territories in the Latin America and the Caribbean region. Governments in the region face a formidable challenge to minimize Zika transmission and limit the impact of Zika on their populations.

The United States Agency for International Development (USAID) supports efforts to strengthen the region’s Zika response through targeted technical assistance, stakeholder coordination, and implementation of key interventions. In El Salvador, the USAID-funded Health Finance and Governance project assessed country capacity to conduct vector control and entomological monitoring of Aedes mosquitoes, the primary vector of the virus. The assessment was conducted from July 11 to July 21, 2016, and sought to gauge current capacities, identify strengths and weaknesses in these capacities, and recommend countermeasures, i.e., specific strategies to minimize the impact of Zika virus transmission.

The first case of Zika in El Salvador was reported in November 2015. By mid-2016, nearly 7,000 cases were reported, 255 by pregnant women. Since the beginning of the epidemic, 318 pregnant women were clinically diagnosed with Zika, a few of which were also laboratory confirmed. While microcephaly has not appeared in significant numbers, Guillain-Barré Syndrome has, with 118 documented cases as per a report from February 2016.

In 2014, a national-level arbovirus steering committee was formed following the appearance of chikungunya. In response to the confirmation of autochthonous Zika transmission in the country in late 2015, the committee began to convene weekly to review available data and provide technical guidance for the Zika response. The Ministry of Health (MINSAL) coordinates the activities of all stakeholders involved in the response, and maintains an online database with epidemiological and entomological data that guides the planning and implementation of Zika mitigation actions.

MINSAL leads an integrated approach to vector management in the country, using a combination of chemical, biological, and physical control methods. These efforts are complemented through public engagement and mobilization, the goal of which is to encourage communities to reduce mosquito breeding sites. There is a wide range of entomological surveillance measures routinely carried out that includes species composition of Zika vectors, their distribution, and their seasonality. Due to the short duration of the assessment, the team was not able to directly verify data collection and handling in the field and are thus the quality of the data. The data appeared comprehensive in terms of quantity and coverage; coming on a weekly basis from sources across the country. Family health teams are engaged in these measures, and collect data related to surveillance and control at the community level. The online database greatly facilitates the analysis of data and ensures access to weekly epidemiological bulletins to anyone with a web connection.

El Salvador has various strengths that position the country to respond to some of the challenges posed by arboviral vectors. A number of issues were also identified that hinder a more credible response to Zika, and likely to future arboviral epidemics as well.