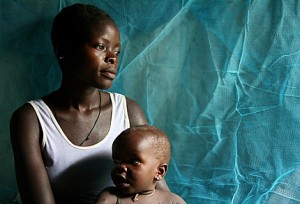 This year, World Health Day is dedicated to raising awareness about the problem of vector-borne diseases, which kill more than one million people in low- and middle-income countries each year. The World Health Organization estimates  more than half of the world’s population is at risk of malaria, schistosomiasis, dengue, yellow fever and other vector-borne diseases, which account for one-sixth of the world’s total disease and disability burden.

To respond to such heavy disease burdens, countries need strong health systems. USAID’s HFG Project is working with partner countries, including Angola, Benin and Ethiopia, to strengthen their health systems and increase their citizens’ access to health services.

In Angola, nearly 12% of four-year-olds tested positive for malaria, according to the 2011 Malaria Indicator Survey. Moreover, the WHO estimates that 5 million Angolans need preventative chemotherapy for schistosomiasis. HFG partnered with the Ministry of Health to develop a budget for the country’s National Health Plan, which will enable the government to more effectively deliver health care to those who need it.

In Benin, 28% of children under five years tested positive for malaria, according to the 2011-2012 Demographic and Health Survey. In addition, the World Health Organization estimates that 2.4 million people—including nearly 1.3 million children- in the country need preventative chemotherapy for schistosomiasis every year.

HFG is supporting Benin’s Ministry of Health to implement its third National Health Accounts (NHA) exercise, which will provide critical information for the health sector planning and budgeting. The project is also supporting the roll-out of mutuelles or community-based health insurance programs, which will expand access to health care among the informal sector. CBHI is health insurance that pools members’ premium payments into a collective fund, which is managed by the members, and covers basic health care costs at local health centers when a member is sick.

In Ethiopia, 22 million people, more than half of them children, need preventative treatment for schistosomiasis. HFG is supporting the Ministry of Health and regional health offices to improve their accounting and budgeting, allowing them to provide the most-important health services to those who need them. In addition, HFG is also supporting the scale up of community-based health insurance and social health insurance schemes, which will allow more people to receive appropriate medical attention. Piloted in 13 districts or woredos in Amhara, Oromia, Southern Nations Nationalities and Peoples, and Tigray, CBHI has been well received by the communities since being introduced in April 2012. More than 144,000 eligible households have enrolled and more than 650,000 beneficiaries have accessed health services.