You are here:Home›Resources ›Vietnam 2013 General Health Accounts and Disease Expenditures with Sub-Analysis of 2013 HIV/AIDS Expenditure 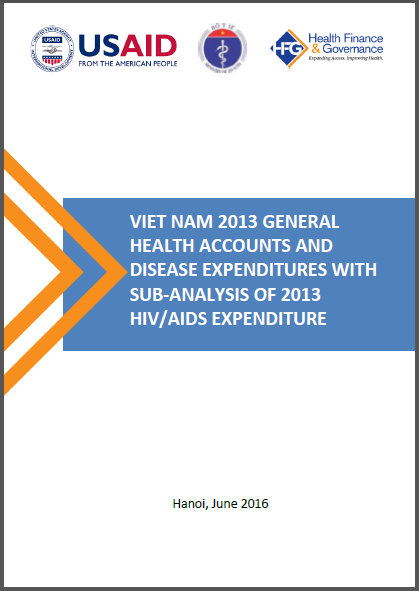 In 2015, with approval of the MOH leaders on the Master Plan for development of the Vietnam Health Accounts – period 2015-2020 using SHA 2011 software; with support and technical consultancy of the Health Finance and Governance Project (HFG), the Ministry of Health (Department of Planning and Finance) had successfully developed the system of national health accounts year 2013 under the SHA 2011. This is the common manual, which was jointly developed by three organizations as OECD, European Union (EU) and World Health Organization (WHO) and was recommended by WHO to be applied uniformly and globally. Data from the system of national health accounts was processed with the new set of tools, which allows for a more detailed analysis on the use of health services and goods by disease group, age, gender and beneficiaries. Other similar criteria, which were used by previous tools, were also provided, with data for multi-dimensional and detailed analysis. The HIV/AIDS sub-account was also established as an integral part of the system of national health accounts year 2013.

With a series of basic indicators of international comparability of the system of national health accounts developed over the past years, combined with detailed data and extracted aggregation from the System of National Health Accounts 2013, which has just been developed under the new toolkit SHA 2011, the Ministry of Health hopes to provide useful information for researchers, managers and policy makers on health financing in and out of the country for reference and use.