You are here:Home›Resources ›Tax Reform and Resource Mobilization for Health 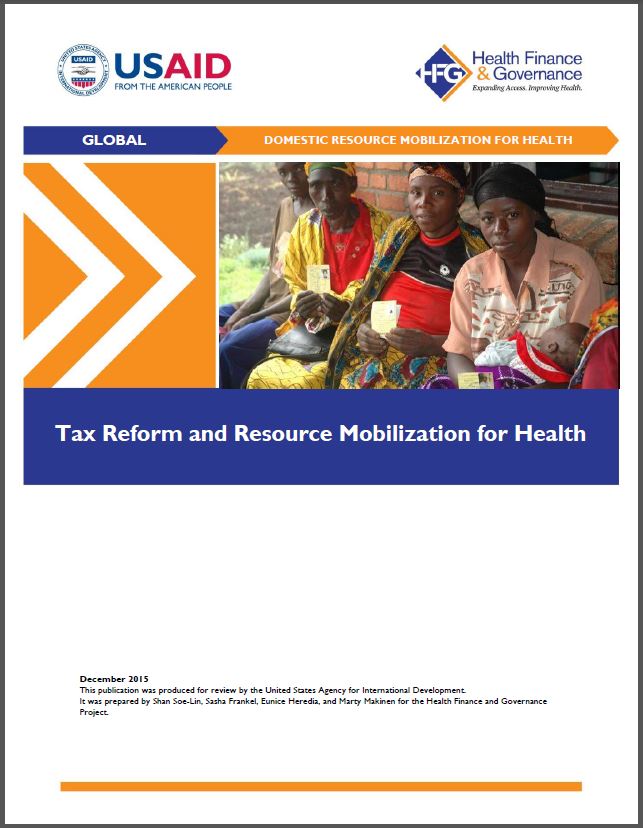 As development assistance for health shrinks and the demand for health expenditures increases, developing countries are under mounting pressure to provide adequate resources for health. Governments can increase available public resources by benefiting from overall economic growth, borrowing, making efficiency gains, and reforming tax laws and improving tax administration, among others. Tax Reform and Resource Mobilization for Health examines whether improvements in tax revenue performance due to tax administration reform result in increases in available government funds that benefit the health sector and the conditions that facilitate greater allocations toward health spending.

Many countries are still far from reaching their tax capacity. If countries’ tax effort rose to the average rate, then government health expenditures could also increase by meaningful amounts. In an example from the Philippines, this amounted to an increase by an additional $2-$8 per capita in government health expenditures. Our analysis of empirical data from 188 countries over 18 years (1995 – 2012) found that increased tax revenues do not necessarily translate to increased health spending.

Based on the country experiences of Ethiopia and Lesotho, where increases in tax-derived revenue were associated with increased allocation to the health sector, this study identifies four factors that favor the allocation of additional tax revenue toward the health sector: generating national political priority for health, creating tax funds specifically for health, earmarking a proportion of tax revenue mobilized, and decentralizing spending.

This report is complemented by two in-depth country case studies, El Salvador and Rwanda. Both of these countries implemented successful tax administration reforms that, together with other measures, significantly increased government allocations to health.