You are here:Home›Resources ›Sustaining the HIV and AIDS Response in the Countries of the OECS: Regional Investment Case Analysis 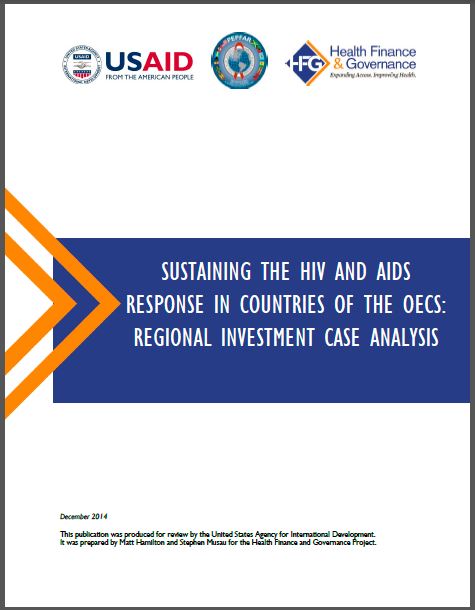 In 2014, the six countries of the Organization of Eastern Caribbean States (OECS) of Antigua and Barbuda, Dominica, Grenada, St. Kitts and Nevis, St. Lucia and St. Vincent and the Grenadines developed HIV and AIDS Investment Case Briefs, with the support of USAID’s Health Finance and Governance (HFG) and Strengthening Health Outcomes through the Private Sector (SHOPS) projects. This document provides a summary of the findings of these briefs, which includes an analysis of the costs of HIV and AIDS programs that respond to the disease in the six countries, the resources that are available, the funding gaps, and the potential impact of different levels of investment in programming on the progression of the disease in the region.

The Caribbean region has the second highest HIV prevalence in the world after sub-Saharan Africa. The AIDS epidemic continues to be the leading cause of death among Caribbean adults 25 to 44 years of age. The region’s estimated adult prevalence is 1.1 percent, ranging from nearly zero to 3 percent (0.1 percent in Cuba to 3 percent in the Bahamas) in the general population. In 2013, there were an estimated 12,000 new infections and 250, 000 people living with HIV in the Caribbean. National averages do not reflect higher prevalence among persons engaging in high risk behaviors, such as men who have sex with men (MSM), sex workers and prisoners.

In response to the need to accelerate the response to HIV and AIDS, the Caribbean region has committed to new targets for expanding HIV testing and treatment by 2020 in order to reduce new HIV infections, late diagnosis and AIDS-related deaths, and improve the quality of life of people living with HIV. This challenge, led by UNAIDS, calls for countries to meet “90-90-90” treatment targets. In addition, the OECS countries would ideally like to have the increased resources available to change eligibility for ART for both adults and children to the new World Health Organization (WHO) guideline recommendations.

With varying levels of resources available for HIV and AIDS programming and health system capacity across the different countries in the Caribbean, the region faces an array of challenges to not only sustain but to scale up their national HIV and AIDS responses. The challenge implied by a 90-90-90 scale up scenario, as well as decreasing funding levels and/or shifts in funding priorities among international donors, requires countries, and the region as a whole to carefully examine programmatic priorities to determine the most efficient way to achieve impact.