You are here:Home›Resources ›Sustaining the HIV/AIDS Response in Dominica: Investment Case 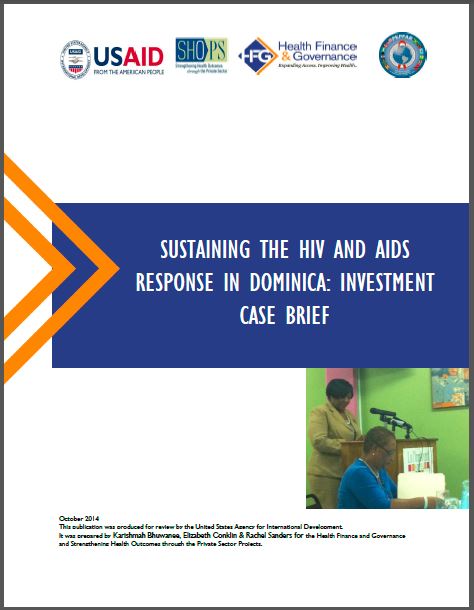 Dominica is an upper-middle-income country in the eastern Caribbean with a population of approximately 72,293. HIV prevalence is estimated at 0.75%. The epidemic is male-dominated, with 70% of those infected being male. While data indicates that the adults aged 25-49 are most affected by HIV and AIDS, incidence trends indicate a higher rate of infection among those over 50. HIV prevalence has shown to be much higher among key populations such as men who have sex with men (MSMs). Further studies are required to produce evidence regarding trends in HIV prevalence among other vulnerable groups such as commercial sex workers (CSW), migrants, and indigenous populations. To date, the following populations have been assigned priority for the HIV/AIDS Response: MSMs and their partners, young people, CSWs, the indigenous population, and prisoners.

The National HIV and AIDS Response Program has continued to reinforce prevention efforts through the scaling-up of HIV counseling and rapid testing sites in additional districts and with non-governmental organization (NGO) partners. Challenges related to retaining those with HIV and AIDS in care and treatment, stigma and discrimination of target groups, and surveillance have been addressed in Dominica’s National HIV and AIDS Strategic Plan 2015-2019. The Strategic Plan was developed during a series of participatory stakeholder workshops in 2014 and includes objectives related to prevention, treatment and care, policy and sustaining the HIV/AIDS response.