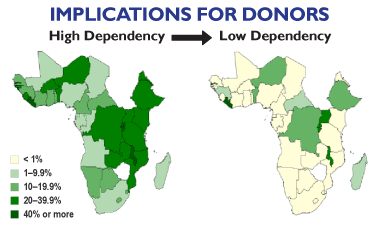 Expected changes in external assistance as percentage of THE, under economic growth and Abuja commitment, 2010 and 2020.

The first decade of the new millennium brought high-level advocacy to mobilize more funding for health coupled with unprecedented economic growth in some African countries. Given the region’s healthy economic outlook, will countries have adequate domestic resources for basic health services by 2020? The Health Finance and Governance (HFG) Project analyzed sub-Saharan Africa’s health financing outlook by projecting domestic health spending per capita to 2020 and comparing it to an internationally accepted target (US$60 per capita) for universal coverage of a package of essential health services.

In a new report, Universal Coverage of Essential Health Services in Sub-Saharan Africa: Projections of Domestic Resources, HFG establishes a baseline level of domestic health spending for 43 sub-Saharan African countries using data from National Health Accounts and the World Health Organization Global Health Observatory. The analysis models two assumptions: 1) domestic health spending will continue to increase in line with current economic growth; and 2) countries will move aggressively towards fulfilling their Abuja commitment (15 percent of government expenditure is allocated to health). Under the economic growth assumption alone, the projections indicate that a little over half of the countries will be spending over US$60 per capita by 2020.

Among the key findings, the analysis shows:

The analysis suggests that in less than a decade, more than half of sub-Saharan African countries (70 percent) would be able to spend over $60 per capita on health through both economic growth and by making health a public priority by fulfilling the Abuja commitment. Some countries, however, will still need external assistance to meet their population’s basic needs. Moreover, the assumption that governments spending $60 per capita on health will ensure universal access to essential services is far from ensured. Of the 13 countries that already spend more than the $60 target, none (with the possible exception of Seychelles) provides essential health services to all their citizens. The financing target is not an end on its own and requires complementary governance actions. Countries and their partners need to not only mobilize resources but also to emphasize other health financing priorities, namely efficient allocation to essential health services and underserved populations, improved risk pooling, and strategic purchasing for quality and efficiency.