You are here:Home›Resources ›Mobilizing Tax Revenue and Prioritizing Health Spending in El Salvador – A Case Study 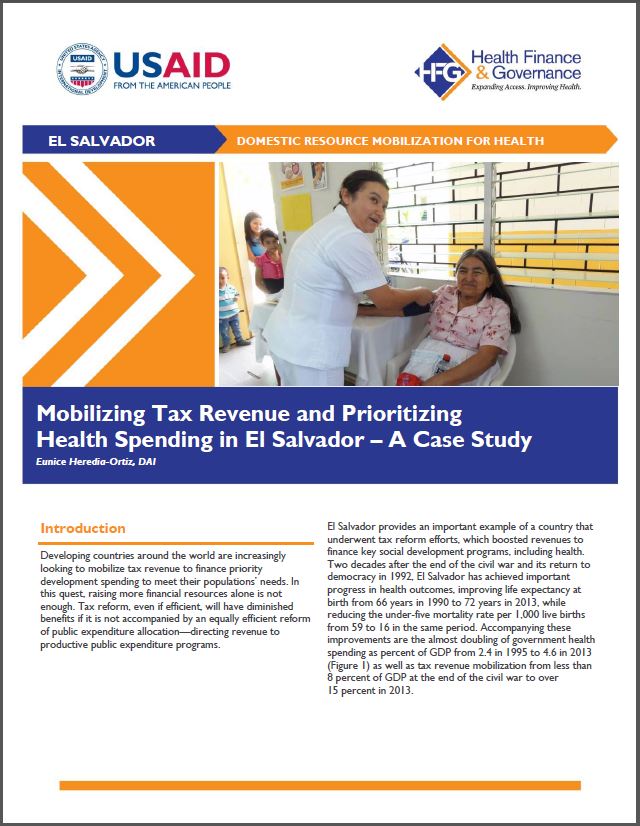 El Salvador provides an important example of a country that underwent tax reform efforts, which boosted revenues to finance key social development programs, including health. Two decades after the end of the civil war and its return to democracy in 1992, El Salvador has achieved important progress in health outcomes, improving life expectancy at birth from 66 years in 1990 to 72 years in 2013, while reducing the under-five mortality rate per 1,000 live births from 59 to 16 in the same period. Accompanying these improvements are the almost doubling of government health spending as percent of GDP from 2.4 in 1995 to 4.6 in 2013 as well as tax revenue mobilization from less than 8 percent of GDP at the end of the civil war to over 15 percent in 2013.

Allocating 18 percent of general government expenditure to the health sector, the Government of El Salvador (GOES) greatly surpasses the average for Latin American countries, which was 10 percent in 2013, and reaches the average for OECD countries. This case study provides a review and analysis of tax policy and administration reforms introduced in El Salvador in the past two decades, the resulting tax revenue mobilization, and the impact on government health spending.