You are here:Home›Resources ›Minding the HIV and AIDS Financing Gap: HFG at Work in Nigeria

Nigeria has the biggest economy on the African continent, fueled by its oil exports, according to World Bank estimates. This wealth, however, has not yet translated into significant increases in allocation of domestic resources to support Nigeria’s HIV and AIDS response. Instead, most of the country’s funding for its HIV and AIDS programs is provided by international development partners, including PEPFAR and USAID.

This donor dependence creates a sustainability challenge for Nigeria, particularly under the current international funding climate, in which international development partners are unlikely to increase their HIV and AIDS funding to meet need in the future. Increasing domestic resources for HIV and AIDS is consistent with the PEPFAR road map for an AIDS-free generation, and also with the Nigerian President’s 2013 Comprehensive Response Plan (PCRP) for HIV/AIDS in Nigeria. 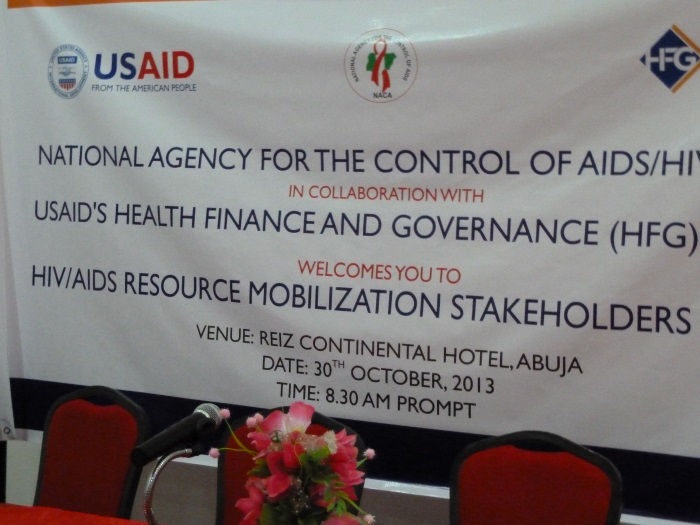 To support the Nigerian government in closing this HIV and AIDS financing gap, the HFG project is working with Nigerian institutions, particularly at state levels, to support the mobilization of Nigerian resources from the public sector, private for-profit sector and NGOs. The mobilization of domestic resources is critical to ensuring that funding is consistently and continuously allocated to pay for the prevention, care, and treatment of HIV and AIDS services for Nigerians.

The state run agencies are a particularly vital component of the resource mobilization strategy as they share the mandate for crafting and implementing HIV and AIDS response policies and also take the lead in delivering
preventive, care and treatment services to people living with HIV and AIDS.

In addition, HFG has engaged in dialogue with the office of the Senior Special Assistant to the President on Millennium Development Goals to encourage the states to take advantage of an existing NGN3 billion ($ 15.7 million) of available funding from that office, for potential allocation for the HIV and AIDS response.

Recently, HFG facilitated a health financing training to focus on the issue of Universal Health Care. The workshop was attended by over 50 participants representing local organizations and national and state agencies including the Federal Ministry of Health, eleven State Ministries of Health, the National Primary Health Care Development Agency, the National Health Insurance Scheme, and the National Tuberculosis and Leprosy Control Programme. During the workshop, HFG contributed to the information that led five states (Anambra, Bayelsa, Ekiti, Niger, and, Sokoto) to plan the adoption of Health Insurance and the promotion of community-based health insurance.