In January 2014, the Government of Indonesia (GoI) began the implementation of an ambitious national health insurance initiative aimed at moving the country toward Universal Health Coverage (UHC). The insurance program, known as Jaminan Kesehatan Nasional (JKN), aims to integrate numerous existing national and district-level insurance schemes, and extend health coverage to the entire population. If Indonesia achieves this goal, then it will have the largest single-payer insurance system in the world and will be well on its way to achieving UHC.

As with any complex health reform, the GOI has experienced a range of intended and unintended challenges in the rollout of JKN. Implementation research (IR) is one potentially powerful mechanism for strengthening the implementation of JKN. With its emphasis on answering questions that decision-makers and practitioners are asking, providing real-time feedback from the field, and linking learning to corrective action, IR can help implementers understand not only what is and isn’t working, but also the specifics of how and why, and what can be done to improve implementation. This will ultimately bring Indonesia closer to its goal of providing access to affordable quality health care for all through JKN.

HFG recently launched the first round of implementation research to promote progress towards UHC in Indonesia. Supported by USAID/Indonesia and USAID’s Asia Bureau, this inclusive research process is engaging national- and district-level stakeholders in identifying priority challenges in the implementation of JKN. The initiation of the first cycle of IR for UHC is particularly timely given the Ministry of Health (MOH)’s plans to discuss JKN policy revisions in July 2016. 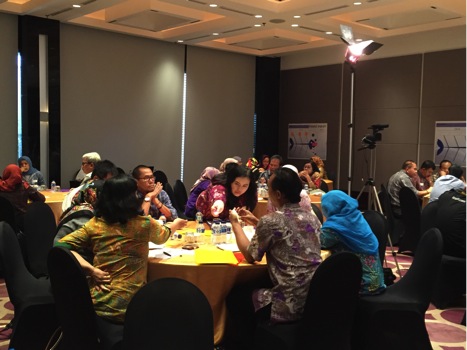 In collaboration with local partner, the Center for Health Policy and Management (CHPM) at Gadjah Mada University, and the MOH, HFG led a two-day launch workshop to gain consensus on the focus and strategy of the first cycle of IR. The involvement of key stakeholders very early on in the workshop planning process led to a rich agenda and an engaged audience with a vested interest in the successful rollout of the research agenda and the forthcoming findings. Workshop attendees included over 60 representatives from three national-level ministries, the national health insurance agency, provincial- and district-level health offices in five regions, local university partners, and USAID.

CHPM and HFG led participants through a root cause analysis of priority problems previously identified in consultations with JKN policymakers and implementers. 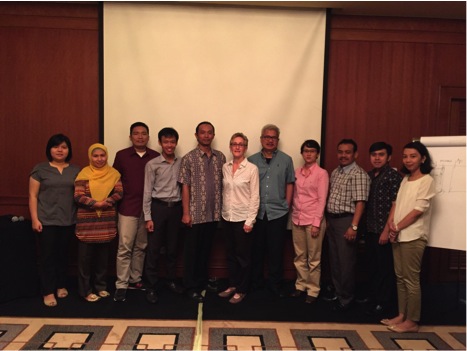 The workshop participants came to a consensus on their joint priorities for the IR activity, selecting the focus for the first cycle of IR: investigating how various policies and regulations affecting primary care are currently understood and implemented at the district level. The research aims to provide recommendations on how to improve JKN’s policies and regulations on primary care as well as how to strengthen implementation of the policies.

CHPM, HFG, and local government and university partners debriefed after the launch to solidify the specific research strategy. The first phase of the IR will consist of an analysis of various JKN regulations related to primary care at national and local levels, followed by the second phase: field work in five districts with a focus on primary care centers. CHPM with HFG will feed the results from these first two phases into the MOH meetings on JKN in July 2016.