Effective governance in the health sector is key in realizing a health system’s core goals and objectives, and in particular, increasing access to health care for a country’s most vulnerable populations. The role of the government in health and its relation to other actors whose activities have an impact on health involves the oversight and guidance of the whole health system, in order to protect the public interest (WHO 2007). Strong governance structures help to stabilize the political economic system, which impacts specific public policies or societal developments as a whole. In Nigeria, the Health Finance and Governance (HFG) project is supporting the Lagos state government through health financing reforms to set up a state-supported health insurance scheme. In order to ensure the smooth take-off of the scheme, HFG Nigeria carried out a governance assessment on the Lagos state health system to describe the roles and responsibilities of the current institutions involved in health financing. HFG assessed the capacity of those institutions to carry out their functions, identify processes, accountability mechanisms, and the existence of regulatory frameworks, as well as to describe how the opinions of health system providers and patients in the private and public sectors are obtained and incorporated in the development of health financing mechanisms.

After discovering this gap in understanding, HFG created platforms for inter-agency collaboration on financing for the LSHS and health, including: 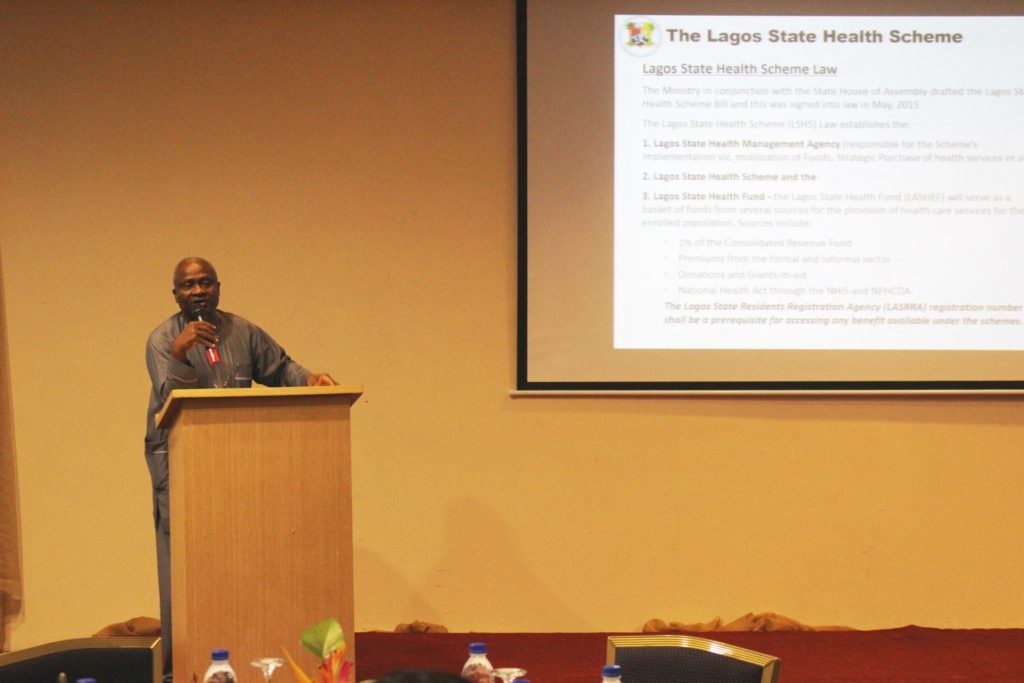 Prior to these inter-sectoral collaborations, the Ministry of Finance, the STO and the MEPB considered the 1% Consolidated Revenue Fund too much to be given to health alone outside their statutory appropriation, as there was a general consensus that funding for health lacks significant justification. HFG was able to share evidence-based data from its earlier fiscal space analysis at one of the first TWG meetings, which focused on the large funding gap for health and the LSHS, with only 5% of the poor being covered out of 67% by the 1% CRF. In addition, HFG supported the TWG’s development of an operational guide for the Lagos State Health Scheme Funds (LASHEF) and the equity fund. Having developed a deeper understanding of the health sector’s financing gaps and needs, and having established an effective working relationship with the SMOH, the MEPB and the STO now advocate for more funds on behalf of the health sector. This is owing to new collaboration and interaction between the Ministry of Health and the financial sectors of the government and provides more insight on their activities which are backed by data-based diagnostics. This delivers the necessary evidence for the decision making the process of designating more money for health.

Increased cooperation between the legislators is another example of how well inter-agency collaboration works.  The working relationship between the Lagos State House of Assembly Committee on Appropriation and the Ministry of Health has improved greatly, and the Chairman of the Committee on Appropriation now defends the health budget, advocating for more money for health instead of budget cuts. This is largely owing to their participation in the inter-agency platform, which has provided a forum for better understanding of health activities and its impact.

The inter-agency collaborations serve as an example of improved health sector governance in Lagos state and have acted as a catalyst for increasing more domestic funds to the health sector. As a result, the Ministry of Health and LASHMA achieved monumental successes from the strengthened partnerships. Allocation to the health sector grew from 6.7% in 2017 to 9.8% in 2018. Additionally, 1% CRF (6.8 billion NGN or 18,904,000 USD) and another 700 million NGN (1,946,000 USD) for the takeoff fund for the state health scheme are currently noted in the 2018 budget, which did not appear in the previous year’s budget. The results from the inter-sectoral collaboration have rightly positioned Lagos state for the successful takeoff of the health scheme, which will ultimately increase access to healthcare for the state’s most vulnerable populations.