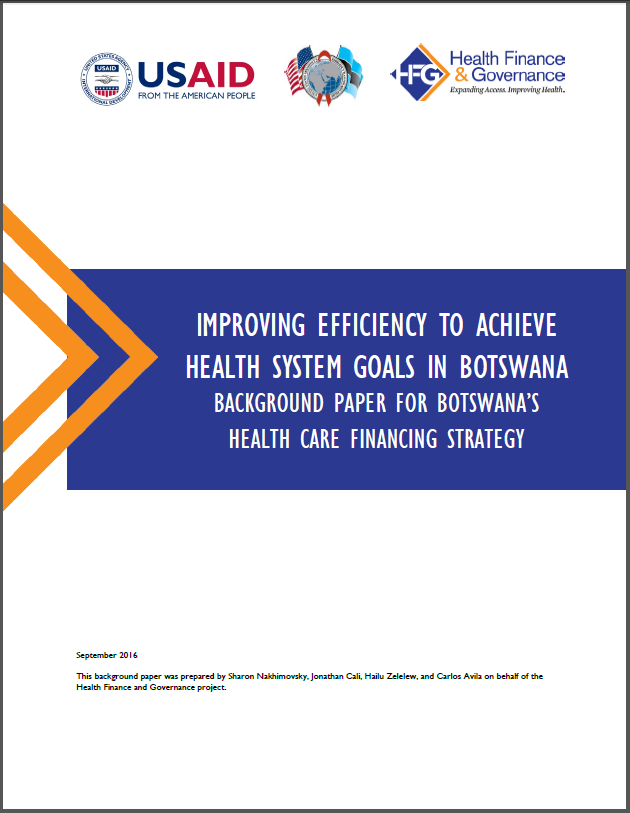 Health outcomes have improved in Botswana over the last few decades.  These successes have come at the same time as overall macroeconomic growth, with annual Gross Domestic Product (GDP) growth averaging around 6 percent between 2010 and 2015 (IMF 2015), and Human Development Index ranking above the regional average. These improvements originate in a strong health service delivery system. In 2008, Botswana’s public health system included 338 health posts and 277 health clinics, sufficient to ensure that at least 80 percent of the population has coverage of essential, high-impact services. Management of these services was initially done by the Ministry of Local Government but has been transferred to district health teams under the Ministry of Health (MOH). As of 2008, Botswana’s public health system also had 17 primary hospitals, 14 district hospitals, two referral hospitals, and one mental health hospital; these hospitals are managed by the central government.

However, challenges remain. Life expectancy at birth, though rising by 17 years between 2000 and 2013, remains lower than the average among upper-middle-income countries. While government programs have reduced HIV mortality, HIV incidence remains higher than the target, and adherence to treatment among people living with HIV is declining . At the same time, donors, which provided 52 percent of HIV program funding in 2010, are expected to reduce funding for Botswana in the near future  – potentially by 10 percent in FY2017. Moreover, new care and treatment guidelines are expected to expand the number of patients who should receive anti-retroviral treatment, which will increase costs just as donor support for HIV declines, putting financial stress on other health programs.

These factors place pressure on domestic programs to raise additional revenue, and do more with less. Economic and health systems indicators demonstrate that Botswana could do more of both. Though economic growth has slowed from a high of 9 percent in 2013, it remains strong enough to give the Government of Botswana (GOB) room to expand fiscal space for health from domestic sources. Also, comparisons with other middle-income countries indicate that Botswana could change the inputs, processes, or distribution of resources to increase outputs for the same investment. For example, Botswana spends more per capita but has worse health outcomes than Namibia, and its infant mortality rate is three times higher than in Mauritius though health spending per capita is comparable. The MOH is aware of the inefficiencies within the country’s health system and has documented its commitment to address them.