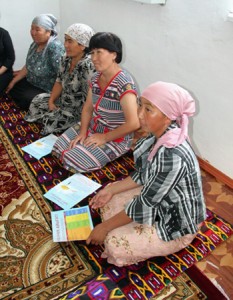 Villagers in Bazar Korgon, Kyrgyz Republic, learn about the symptoms of TB.

To improve treatment outcomes and efficiency, the Kyrgyz Republic is shifting to increased outpatient care, which the WHO recommends. To do this, the Kyrgyz Republic has embraced USAID’s and other international donor’s support to restructure its health care system. In the 1990s, with USAID support, the government transitioned its general hospital system to case-based financing. But TB hospitals are still paid through the former Soviet system of chapter-based financing which relies on historical data—such as number of beds filled—to determine government funding for a facility for the coming year. This old system creates incentives for prolonged hospitalization of patients, as the health sector would lose funding if hospitalization or number of beds filled each night decreased.

To support the transition, the HFG Project is working with the Kyrgyz government’s Mandatory Health Insurance Fund (MHIF) to restructure TB hospital payment systems. Under the new system, case-based financing will provide hospitals with funding based on the specific cases they treat. This shift allows for funding to support incentives for rational clinical care. For example, a hospital would receive a large set fee for treatment of a contagious MDR case with complications, while the fee for a non-contagious MDR case would be less. Treatment for non-contagious, non-MDR without complications would be extremely low, so as to deter hospitalization.

A major obstacle to this transition has been concern within the health care system that fewer hospitalizations for TB would mean that crucial health sector funds (which would have been allocated to TB hospitals under the old system) would be lost to the general budget. The solution has been to develop strategic health purchasing, which supports the shift to out-patient TB services. “Strategic” means improving both budget formation and provider payment.

The changes in budget formation have been accomplished by moving TB funding from direct budget funding under the Ministry of Health, to the MHIF which pools health funds and budgets by program, including the State Guaranteed Benefit Package (SGBP) of services. This change allows for the retention and reinvestment of savings back into the health sector.

The HFG team has worked with national partners to undertake four steps: 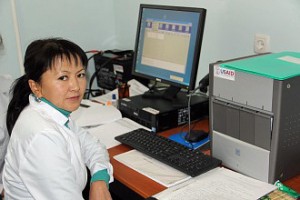 Following further dialogue with the MHIF, the next step will be to support implementation of the new hospital payment system under the umbrella of the Kyrgyz National Health Sector Strategy—Den Sooluk—in cooperation with other donor partners in the Sector-wide Approach and other USAID projects. Implementation of the TB hospital payment system will put funds flows in line with clinical recommendations. For all but the most serious cases, this change means significant reductions in hospitalization. Instead, patients will be able to receive the care they need based on the type of TB they have—including fully outpatient treatment, with limited hospitalization used to address specific conditions, as per WHO recommendations and national clinical practice guidelines.

TB hospital restructuring driven by the new payment system is expected to create savings that will be reinvested in outpatient TB services, supplies for hospitalized MDR-TB patients, lab transportation, patient social support, and, over time, drugs. For the patient, this means less time away from home and a better chance of recovery. For the country, it means eventual decreases in TB rates (including MDR TB), and less costly treatment. Improved TB purchasing is an important step on the path toward increasing return on TB investments, and mitigating the impact of declining donor funds by integration and institutionalization for sustainability.