You are here:Home›Resources ›Giving a Voice to Benin’s Large Private Health Sector 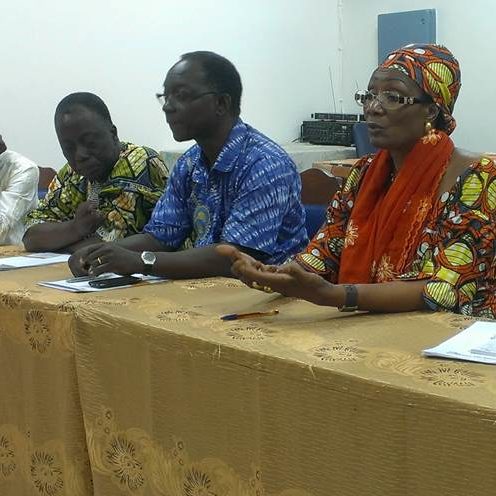 May 2014: PSSP General Assembly meeting to select the governing board.

Previously underappreciated for its contributions to the health of the Beninese population, the private health sector has a new voice in national level deliberations. Providing as much as 45% of care, the private sector is an important player in Benin’s health sector, and consequently, in achieving the Government of Benin’s goal of universal health coverage (UHC). But until recently, the private sector contribution to the health sector in Benin was not seen as a potential resource for the Government of Benin to reach its goal of UHC.

With the inclusion of a health insurance initiative (Regime d’Assurance Maladie Universelle, RAMU), in the last ten year National Health Development Plan, it became abundantly clear that the plan would not achieve UHC without the involvement of the private sector. The Private Sector Platform (Plateforme du secteur sanitaire privé, PSSP), was created to bridge the gap between the private and informal unregistered health sector, and the government. Prior to the establishment of the PSSP, there was no single advocacy group for the private health sector to engage with the government on healthcare policy development and implementation. The platform, established in 2014 with support from the USAID Health Finance and Governance (HFG) project, was officially registered in October 2015.

The idea for the PSSP began to solidify in October 2013 with the dissemination of the then-recently completed Private Sector Assessment, at a workshop that included representatives of the private and public sectors, nonprofit groups, and donors. The workshop brought to the surface several needs, including the need for a stronger private sector presence at the national policy level. Participants met later and laid out a roadmap for the creation of an organization to represent the private sector at the national level.

In 2014, HFG supported the development of by-laws, the appointment of a President and Vice President, and the first General Assembly meeting (in May), effectively creating the platform. Once established, HFG provided ongoing support to the PSSP specifically to promote peer-learning and knowledge exchange. HFG sponsored the attendance of a PSSP-Benin delegation at the East Africa Health Federation’s (EAHF) May 2015 meeting in Kigali, Rwanda, which focused on “the role of the private sector in sustainable financing of the health system”. The delegation was able to attend a session that brought together private sector federations from across West Africa to discuss lessons learned and successes.

With official registration with the Government of Benin in October 2015, the PSSP is now able to participate in national level policy discussions as an official representative of the private health sector.  The PSSP participated in the midterm evaluation of Benin’s National Health Plan (10 year), providing the voice of the private sector at the national level deliberations.

Now the private sector has a functioning mechanism to influence the next ten-year national health strategy and other policies affecting the delivery of care. The PSSP also has a network of international peers through the EAHF from which to learn. With the completion of HFG’s mandate in Benin, the USAID-funded Advancing Newborn, Child, and Reproductive Health (ANCRE) Program continues to support the platform through capacity-building, working to make the PSSP a strong, effective, advocate for its constituency. The PSSP continues to provide leadership for the private health sector in Benin.  Recently the government requested technical inputs from the PSSP on the development of new national level health agencies including the Agency for Hospital Medicine Management, Agency for Primary Health Care Management, and the Agency for Medical Practice Quality Control.