On a recent visit to the Dewa Chefa district community-based health insurance (CBHI) scheme, Ethiopia’s Minister of Health Dr. Kesetebirhan Admasu recognized the success of CBHI in expanding access to care and reaffirmed his earlier announcement that Ethiopia would expand CBHI throughout the country.

The United States Agency for International Development (USAID) has worked with the government of Ethiopia to design, pilot, and scale up CBHI  scale up CBHI through successive technical assistance projects implemented by Abt Associates. The government places high priority on achieving universal health coverage, and views insurance coverage as a key mechanism for achieving this goal.

During the February 21 visit to the Dewa Chefa scheme in Amhara Region, Dr. Kesetebirhan observed that, “the achievement of this CBHI scheme not only illustrates the effort that government is making towards achieving universal health coverage, but also serves as a roadmap for the transformation of access to health services in Ethiopia.” 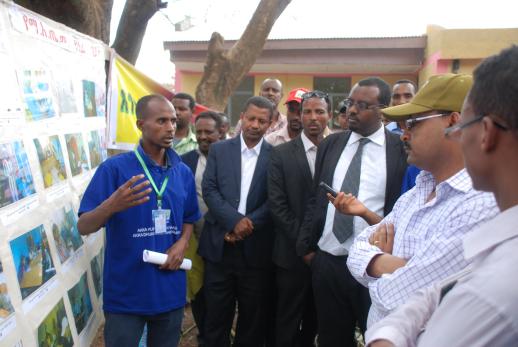 Dewa Chefa’s CBHI scheme, one of the 67 operating in Amhara , was selected for the minister’s visit because of its exemplary performance. Since its establishment in May 2013, the scheme has served 14,938 household members, covering 53.9 percent of eligible households in the district.

While in Dawa Chefa, Dr. Kesetebirhan visited the health centers at Woledi and Tuche communities, where he discussed achievements of CBHI with beneficiaries, community administrators, and health service providers. All of them assured the ministerial delegation that CBHI had brought significant positive changes in health service provision and utilization.

“Before CBHI was started in our district” said Mr. Behonelegn Desalegn, a scheme beneficiary, “we had to sell whatever we had, even our precious cattle, when one of us got sick. But now because of our CBHI membership, we can get appropriate health services when a family member gets sick. With early treatment, many people have avoided unnecessary referrals to hospitals, which were frequent before. Some people in our village got treatment of their serious illnesses through surgery as they have been referred to hospitals. Had it not been for CBHI, it would have been unthinkable to get such kinds of services without impoverishing ourselves.”

Since establishment of the scheme in Dawa Chefa two years ago, over 3.6 million Ethiopian birr ($179,624) in premium payments has been collected from members, and the scheme has reimbursed contracted health facilities providing care nearly 1 million birr ($47,854). Dawa Chefa is an expansion CBHI scheme – one of 185 schemes established following a successful pilot in 13 districts in four regions of the country in 2011–2013. Based on the early indications of the schemes’ achievements, the minister announced that the government will scale up CBHI to all regions of the country.

During a discussion in Dawa Chefa with local representatives and members of his delegation, the minister reaffirmed this commitment to making CBHI membership available to people throughout the country. He explained that CBHI not only improves access to health care services, but also helps immensely to increase financial resources in the sector. He emphasized that CBHI can also be an effective instrument to combat poverty, by protecting members from catastrophic expenditures on health care.

Dr. Kesetebirhan stated that the Ministry will pay special attention to the process of scaling up CBHI, and called on the regional and city administrations present and all other concerned governmental bodies to provide the required support and leadership for the CBHI initiative.

Heads of the Regional Health Bureaus of Amhara, Oromia, Southern Nations, Nationalities and Peoples (SNNP), Tigray, and Harari regions, and of the Addis Ababa and Dire Dawa City Administrations took part in the visit. They echoed the minister’s appreciation of the achievements of the Dewa Chefa CBHI scheme and committed themselves to expedite the scale-up of CBHI in their regions and cities. In particular, Amhara Region officials reiterated their commitment to establishing CBHI schemes in the remaining districts in the region.