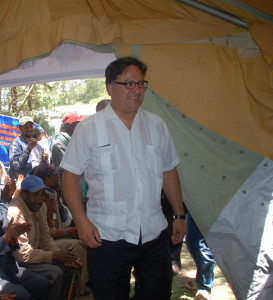 Earlier this summer, Dr. Ariel Pablos-Mendez, Assistant Administrator for Global Health, and Dr. Kebede Worku, State Minister of the Ethiopian Federal Ministry of Health, visited one of Ethiopia’s first community-based health insurance (CBHI) schemes. Since its establishment, the Gimbichu CBHI scheme has registered remarkable results, and is considered among the most highly performing schemes in terms of membership uptake, renewal and financial sustainability. The current enrollment ratio stands at 58% of the total eligible households in the district, which has an estimated population of 108,255.

In his welcoming speech, Dr. Kebede Worku described the efforts made by the Government of Ethiopia to initiate CBHI in the four most populous regions of the country – Tigray, Amhara, Oromia and Southern Nations, Nationalities and People (SNNP).“We introduced CBHI in 13 districts at a pilot level four years ago.” said Dr. Kebede. “By evaluating and monitoring our strengths and weaknesses, we have taken the lessons from this pilot to expand CBHI to 185 additional districts. Based on this good experience, the Ethiopian government’s vision is to establish CBHI schemes in each of its 900-plus districts by 2020, and to provide coverage for 70 percent of the population in the agricultural and informal sectors.” 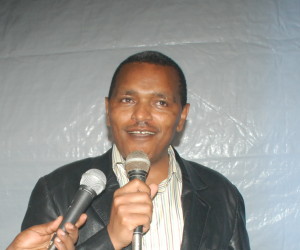 Dr. Kebede also recognized the government and people of the United States for the continued technical and financial support to health insurance initiatives. He said that “on behalf of the Ethiopian Government I would like to take this opportunity to specially recognize and thank the American people and government for the continued support in initiation and implementation of Ethiopia’s CBHI initiative.”

Dr. Pablos-Mendez addressed the gathering by reminding the audience of his visit to Ethiopia four years ago. He said that as a public health professional, he appreciates the progress the Ethiopian Government has made in health care financing reform and implementation of health insurance. Health insurance was a new concept for the country during his first visit. He said the government’s efforts to introduce insurance had produced significant achievements.

Dr. Pablos-Mendez also had the opportunity to hear from local beneficiaries about the changes they have witnessed since the establishment of CBHI in their villages, and its impact on their lives.

Mrs. Kumele Cherenet, a community member with three children, told the visitors about her experience with the new insurance scheme. “Before implementation of CBHI in our village, we used to borrow up to 1,000 birr when we got sick and had to repay double the amount of this loan. Now, by contributing an affordable amount, we are getting quality health services both at the health center and the hospital. Women in our villages have witnessed many positive changes since the introduction of CBHI.”
Mr. Chalchisa Megersa , a farmer, said “among the villagers here, at the benefit of being CBHI member least one of us has sold our cattle to solve our health related problems. But now, thanks to CBHI, each household can get comprehensive healthcare services without the need to pay at time of seeking these services.” 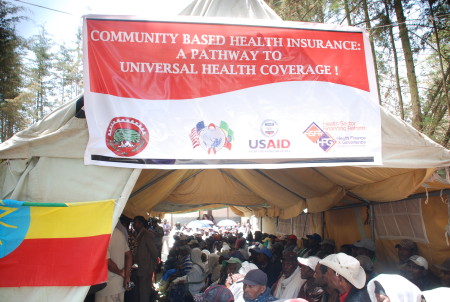 Dr. Pablos-Mendez highlighted Ethiopia as one of the success stories, having reached an important milestone by achieving its target for Millennium Development Goal #4, reducing child mortality. The success of Gimbichu’s CBHI pilot scheme demonstrates that Ethiopia will be a model country in health insurance, and is moving towards achieving universal health coverage.

With regard to testimonies of CBHI member community representatives, Dr. Pablos-Mendez reflected that residents of Gimbichu are not only beneficiaries of CBHI, but also part of the change that the world strives to see: equity in health by achieving universal health coverage. He also reassured the gathering that the American people and government will be by their side to ensure this change.

The visit was a big event for communities in Gimbichu, and the public gathering was attended by more than 400 people including community representatives, and federal, regional, zonal and district governmental officials. A large number of CBHI beneficiaries attended the event to welcome Dr. Pablos-Mendez. Community leaders thanked the visitors for their continued support and for visiting their CBHI scheme. They then presented Dr. Pablos-Mendez and other guests with gifts of traditional costumes as a gesture of gratitude and respect.

The dignitaries were accompanied on the visit by senior officials and experts from the FMOH, the Oromia Regional Health Bureau, the Ethiopian Health Insurance Agency  (EHIA) and USAID Ethiopia.