You are here:Home›Resources ›Entomological Monitoring, Environmental Compliance, and Vector Control Capacity for the Prevention of Zika and Other Arboviruses: Dominican Republic Assessment Report 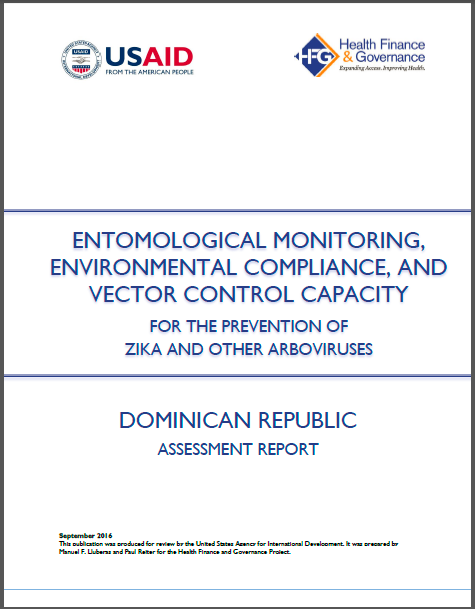 he first case of local, vector-borne transmission of the Zika virus in the Americas was identified in May 2015 in Brazil. By July 2016, the virus had spread to nearly all Zika-suitable transmission zones in the Americas, including the majority of countries and territories in the Latin America and the Caribbean (LAC) region. Governments in the region face a formidable challenge to minimize Zika transmission and limit the impact of Zika on their populations.

The United States Agency for International Development (USAID) supports efforts to strengthen the region’s Zika response through targeted technical assistance, stakeholder coordination, and implementation of key interventions. In the Dominican Republic (DR), the USAID-funded Health Finance and Governance (HFG) project assessed country capacity to conduct vector control and entomological monitoring of Aedes mosquitoes, the primary vector of the virus. The assessment was conducted from June 19-25, 2016 and sought to appraise current capacities, identify strengths and weaknesses in these capacities, and recommend countermeasures, i.e., specific strategies to minimize the impact of Zika virus transmission.

The DR has a National Vector Control Program situated within the MoH’s National Center for Control of Tropical Diseases (CENCET), which is responsible for the public sector response to Aedes aegypti and other arboviral vectors. The program has sufficient guidance documents, such as protocols and manuals, to direct field operations carried out by provincial vector control units. Vector control in the country is multi-pronged, and includes larviciding and adulticiding, reduction of mosquito breeding sites, and educating communities to lead local control efforts. There is a demonstrated capacity in country to collect and analyze epidemiological data, a critical element in the Zika response. Collaborations with the U.S. Centers for Disease Control and Prevention and the Pan American Health Organization ensure the program and the MoH receive periodic, updated technical guidance. Although various elements are in place, key challenges must be addressed to mount a sufficiently robust response to Zika and limit its impact in the country.

Although various elements are in place, key challenges must be addressed to mount a sufficiently robust response to Zika and limit its impact in the country.