You are here:Home›Resources ›Dominica 2010-2011 National Health Accounts and HIV Subaccounts 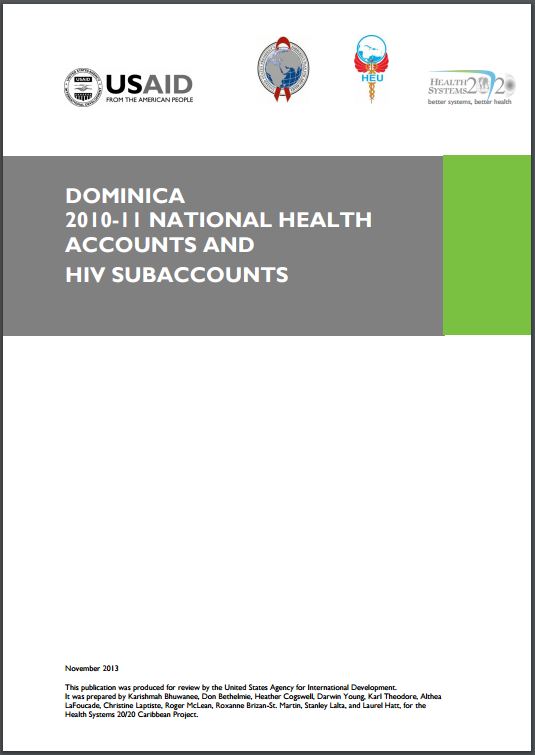 Dominica is an upper middle-income country in the Eastern Caribbean, with a population of approximately 72,000 (Eastern Caribbean Central Bank 2013). Average economic growth in Dominica over the past decade, 3.7 percent, has been greater than the regional average, 2.3 percent (World Bank 2013). This is partly due to the Government of Dominica’s recent restructuring of the economy by diversifying away from the agricultural sector and into service sectors, such as tourism. The government has also made progress in reducing unemployment and poverty. However, strategies to provide access to affordable, quality health care, especially for the poor, remain a development priority. While the health system in Dominica has performed well in delivering primary care, secondary care is limited and advanced care is not available to all income groups, as accessing it often requires travel to off-island facilities. This poses a significant risk to the health of the population of Dominica, as its disease burden becomes more complex.

A lack of solid health financing information for evidence-based planning, and growing momentum for health reforms inspired the request for a National Health Account estimation by the Government of Dominica. Technical assistance to produce these estimates was provided by the USAID’s Health Systems 20/20 Caribbean Project. This report presents the findings of the Dominica National Health Accounts and HIV Subaccounts exercise for fiscal year 2010-11.