You are here:Home›Resources ›Data Drives Decisions to Increase Number of Health Workers in Swaziland

Swaziland has a shortage of health workers for priority health services, particularly HIV and AIDS. This country of approximately one million citizens has the highest HIV prevalence in the world – 26 percent. At the same time, Swaziland has fewer than two healthcare workers ‒ doctors, nurses, or midwives ‒ for every 1,000 citizens. These numbers make Constance Vilakati’s and Thabsile Simelane’s jobs very difficult indeed.

Constance Vilakati is the Under Secretary for the Administration for Health, and Thabsile Simelane is the Principal Human Resource Officer for Health. They, alongside their colleagues in the Ministry of Health (MOH)’s Human Resource Unit (HRU), are responsible for managing the government’s health workforce to ensure that the population receives the health services they need. 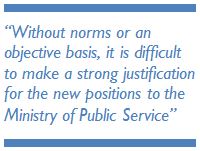 When the USAID-funded Health Finance and Governance Project (HFG) began working with the HRU, Ms. Simelane brought up the shortage of positions and their inability to quickly fill vacancies as critical concerns.  HFG partnered with the HRU team to strengthen their request for new posts and improve hiring and deployment processes.

Beginning early in the budget cycle, the team worked together to produce the MOH’s first annual “Human Resources for Health Status Report.” The report presented data from the existing Human Resource Information System, but analyzed the data to clearly show where there was the greatest need for staff, health facilities which were largely nonfunctional due to staffing shortages, geographic areas with large numbers of vacant positions, and facilities that were overstaffed.  HFG also supported the HRU to establish the Human Resources for Health Management Committee, which brings together key decision-makers within the MOH to manage the recruitment process for new health workers.

The Committee used the status report to determine which positions were priorities to fill, and streamlined the recruitment process to allow faster recruitment. As a result, 475 health workers were recruited between April 2014 and February 2015 —filling a backlog of vacancies from previous years and fulfilling the need for 250 positions needed in 2014. These positions included over 150 new nurses, nearly 60 doctors, and over 130 allied health cadres, all of which were allocated to facilities according to the priorities determined in the status report.

To enable the HRU to further improve the process for the next recruitment cycle, HFG is supporting the development of recruitment guidelines to ensure effective and transparent recruitment and deployment.

HFG also encouraged the HRU to think through the resources they needed  to better manage this expanded health workforce, and developed the first ever request for an additional operating budget for the HRU.

As a result of the evidence-based request and accurate budget submission, the Ministry of Public Service allocated 112 new positions to the HRU for 2015 (approximately 40 percent of the MOH’s request), and granted the HRU their first operating budget in order to strengthen the function of the unit.  These positions include two new human resource officers to increase the HRU’s capacity to manage the health workforce, five doctors, 22 nurses, and 38 allied health professionals. These new positions, coupled with the hiring and deployment of the remaining 149 positions from 2014, will allow the MOH to absorb key PEPFAR-funded positions for the delivery of HIV services and strengthen primary health care services in underserved areas. Patients can now be assured that when donor assistance wanes, critical healthcare personnel will still be in place to provide quality care.

Based upon this year’s experiences, the Ms. Vilakati and Ms. Simelane have a newfound awareness of the types of data they need to make decisions. The Human Resources for Health Status Report provided the first level of information they required—awareness of the distribution of their posts and vacancies. However, in preparing the request the HRU became aware of the need for better information to guide their priority setting and resource allocation. HFG is currently working with the HRU to adapt the Human Resource Information System to better capture and analyze human resource data for decision-making. Plans are also underway to increase the sophistication of the HRU’s analysis of how many health workers they need, including using data on the disease burden of communities and the Workforce Indicators of Staffing Need tool to place standards on expected workload. Ms. Simelane recommends the adoption of the staffing norms so that it forms the basis for prioritizing the request. She says, “without norms or an objective basis, it is difficult to make a strong justification for the new positions to the Ministry of Public Service.”

With HFG’s support in these critical data generation and analysis areas, Ms. Vilakati and Ms. Simelane are confident that they will be better able to negotiate with the Ministry of Public Service in the 2016 budget cycle, and to make evidence-based decisions about where to place their health workers for the maximum benefit of the country.