You are here:Home›Resources ›Child-Friendly Courtroom Opens in Swaziland 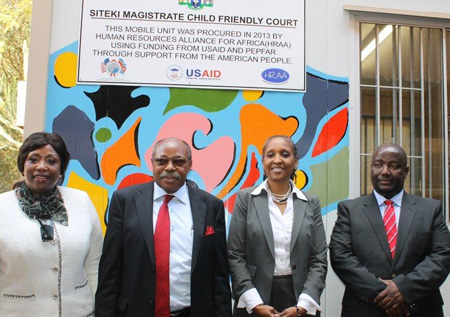 To help these young victims, the Government of the Kingdom of Swaziland has taken strong steps to support them by providing not only counselling and health services, but also special child-friendly courts (CFCs) to make it easier for them to testify against their attackers. Through the President’s Emergency Plan for AIDS Relief (PEPFAR), the HFG project assisted with developing the country’s third CFC in Siteki, Lubombo and with training social workers to assist young victims.

At the court’s inauguration on June 12th, U.S. Ambassador Makila James said, “The child-friendly court facilities allow children who have endured rape or other serious abuse to testify in court without having to face the alleged perpetrator. Instead of being questioned in front of the abuser, the child will be allowed to stay in a separate room which is connected by video link to the court room, and he/she will be supported by a court intermediary who will help the child to understand and respond to the questions posed by the magistrate, the prosecutor, and the defense lawyer.”

Lubombo’s Principal Magistrate, Mr. Israel Magagula, chose to give up his office for a smaller one so that it could be converted into the new CFC. HFG supported the renovation of Principal Magagula’s office into the main court room and also purchased a mobile structure that has been turned into a child interviewing room that is decorated with brightly colored furniture and includes a family of anatomically correct dolls to help child victims tell their stories.

“Yet, while a nice building and furniture can help make children a little more comfortable in otherwise very difficult circumstances, what they need most of all is justice. They need passionate and adequately trained advocates – prosecutors, magistrates, court intermediaries, police and especially social workers. Social workers have a very important role in protecting children, as laid out in the Child Welfare and Protection Act, and you have some excellent and committed staff in the Department of Social Welfare here in Lubombo,” said Ambassador James. 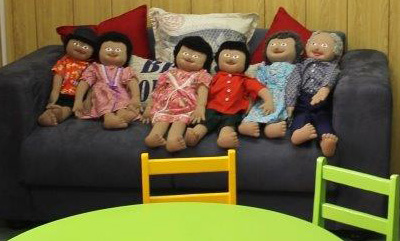 The HFG project is working with the Directorate of Social Work in Lubombo to build the capacity of staff to process abuse cases. In January 2014, HFG conducted a seven-day intensive Forensic Social Work training for 14 individuals, which included all the social workers in the Lubombo, Hhohho, Manzini and Shiselweni regions as well as their supervisors. The training focused on assessment of cases, technical writing of forensic reports, and techniques for working with child witnesses. HFG will also train court intermediaries to work with child witnesses as well as the other court “role-players” to learn how to effectively operate a CFC. HFG also supported an orientation for prosecutors in the Lubombo region on utilizing the Child Protection and Welfare Act in court proceedings.

Research from around the world shows children are less frightened and better able to speak about their experience in child friendly courts, resulting in better evidence and more effective sentencing of offenders. Similar child-friendly courts exist in Mbabane and Nhlangano.