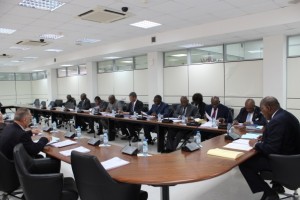 To mobilize more domestic resources for health, countries need to accurately estimate the cost of their national health strategies and health sector plans. In Angola, the HFG project worked closely with the Ministry of Health to complete the costing of Angola’s National Plan for Health Development 2012–2025 or PNDS.  As part of Angola’s broader economic development strategy “Angola 2025,” PNDS is a strategic and operational document that encompasses nine health programs subdivided into 50 projects. Each project has specific strategies, targets, activities, and interventions, and PNDS describes  the government’s role in the health sector in collaboration with other sectors and partners over the next 13 years.

At PNDS’s launch in August 2012, however, the plan was still missing budget estimations necessary for its submission to the Council of Ministers for approval. The Ministry requested USAID’s assistance in preparing the budget for the PNDS, and HFG was engaged to support the budgeting process, using the World Health Organization’s One Health Tool. HFG worked closely with the Ministry’s technical team to collect data, produce a validated budget, train Ministry of Health staff how to use the One Health Tool, and present the final health budget to the Multi-Sector Commission. The One Health Tool software and training materials were translated into Portuguese, and Angola is the first country to use this version.