You are here:Home›Resources ›Additional Domestic Resources to Scale-up the HIV and TB Response in South Africa 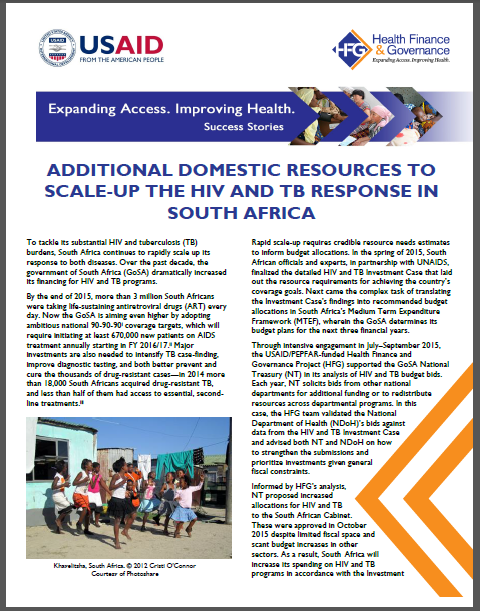 Resource Description: To tackle its substantial HIV and tuberculosis (TB) burdens, South Africa continues to rapidly scale up its response to both diseases. Over the past decade, the government of South Africa (GoSA) dramatically increased its financing for HIV and TB programs.

Rapid scale-up requires credible resource needs estimates to inform budget allocations. In the spring of 2015, South African officials and experts, in partnership with UNAIDS, finalized the detailed HIV and TB Investment Case that laid out the resource requirements for achieving the country’s coverage goals. Next came the complex task of translating the Investment Case’s findings into recommended budget allocations in South Africa’s Medium Term Expenditure Framework (MTEF), wherein the GoSA determines its budget plans for the next three financial years.

Through intensive engagement in July–September 2015, the USAID/PEPFAR-funded HFG project supported the GoSA National Treasury (NT) in its analysis of HIV and TB budget bids. Each year, NT solicits bids from other national departments for additional funding or to redistribute resources across departmental programs. In this case, the HFG team validated the National Department of Health (NDoH)’s bids against data from the HIV and TB Investment Case and advised both NT and NDoH on how to strengthen the submissions and prioritize investments given general fiscal constraints.